In 2000, WHEEL (Women’s Housing and Equality Enhancement League), a grassroots organizing effort of homeless and formerly homeless women, and Mary’s Place (an empowerment ministry for women and families) began standing vigils for homeless people who died outside or by violence in King County. Inspired by the international Women in Black movement, we stand silent, dressed in black, for one hour, while men who support us hand out flyers to tell passer-by what we are doing and who we are honoring. We continue to stand. WHEEL started Women in Black with the idea of focusing on violence towards homeless people, but also as a means of fighting apathy and indifference. As WHEEL member Sephora M’Tana says, “It’s like we are part of a subliminal caste system. Untouchables.”

But the homeless people the groups have stood for-strangled, stabbed, run over by a train, overdosed, victims of random beatings-could have been any one of us. “No one needs to die homeless or unknown. I don’t want those women to be standing up for me one day,” says Kevin Terry of Tent City.

And the vigils have had a powerful impact, already. WHEEL member Anitra Freeman says, “Many of the people passing by glance at our fliers. Then they slow down, reading. Their faces change. Some stop walking to finish reading. They look up at us. At our fifth vigil, a man dropped to his knees in front of us and prayed for a long time.

– from “Dead Reckoning: The Women in Black movement” by Elise DeGooyer and Michele Marchand, originally published in Real Change, June 14, 2001

It helped to share our grief and loss with a community; to remind ourselves, and others, that everybody matters. It still did not seem enough.

There is currently no established place in the world to remember and honor people who have died while homeless. The absence of such a place is a source of great pain to the homeless community and its supporters. In 2003, WHEEL drew together a Homeless Remembrance Project Committee to establish public places of gathering, beauty and remembrance to honor homeless people who have died in King County.

The Homeless Remembrance Project Committee has built broad, far-reaching support with people from all walks of life and across many neighborhoods: in the faith community, among social service providers, and with designers, artists and funders. We have achieved many victories. In 2005, AIA-Seattle selected our project as the “Design Challenge” for their Annual Honor Awards. Entries were displayed in the lobby of Seattle City Hall. That same year, Seattle City Council unanimously passed a resolution supporting the Homeless Place of Remembrance on public land. We have partnerships with the Seattle Department of Parks and Recreation, Seattle Department of Transportation (SDOT), and the Seattle Department of Neighborhoods (DON), which funded our Conceptual Design Process (with a DON Small and Simple Fund matching grant) and is providing support and partial funding for construction (through its DON Large Project Fund matching grant).

A Place of Remembrance

The concept of the Homeless Remembrance Project is twofold: a “Tree of Life” gathering place and sculpture in Victor Steinbrueck Park and “Leaves of Remembrance” embedded in sidewalks throughout Seattle. It is unique in its approach to raising awareness about homelessness through a public art project that has both a permanent presence and an ongoing outreach activity. It raises awareness of the struggles of the homeless community and the essential dignity of those struggles, while fostering a co-operative approach to ending homelessness.

Both ‘Tree’ and ‘Leaves’ are based on homeless-led organizing efforts to give dignity to homeless people, and to increase visibility and enhance existing social networks within the community. They do so in a variety of unique and profound ways:

Second, the “Tree of Life” gathering place will enhance a currently-neglected part of Victor Steinbrueck Park, marking a moment of renewal within a cherished civic jewel, a heavily-touristed park and a spectacular vista accessible to all.

Third, the project fosters strong and connected communities as we organize, neighborhood by neighborhood, housed and homeless people working together, to place “Leaves of Remembrance” throughout the City. This work knits together social service agencies, businesses and other places of importance to the homeless community while reaching out to a larger audience via the internet and broadcast mediums.

Finally, as it honors the memory of those who have fallen under most unfortunate circumstances, the “Tree” and “Leaves” offer inspiration to the wider community to do more to prevent and end homelessness and to understand the importance of providing access to healthcare and housing for all. Ultimately, we hope the creation of this project will signify a moment in history when we collectively recognize the need and develop the will to bring an end to some of the many causes of homelessness. 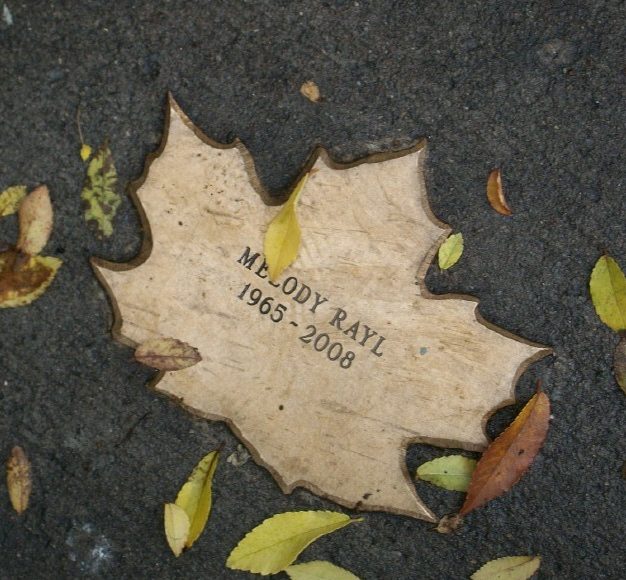